Working system, ran an upgrade and am no longer able to trigger the PCF8574 (8CH I/O Expander)

Thought I’d pulled a wire, so spent some time checking and rebuilding. Eventually ran a simple code in Thony on the Pi - that program allows me to trigger the relays that are controlled by the 8 channels, so I eliminated hardware issues.

Went back to Mycodo and pressed save - the relays, some of which were open, all closed. However the individual triggering of them via the Mycodo end doesn’t work. (So, I now know that the software controller at Mycodo is able to reset them, but not trigger them individually) 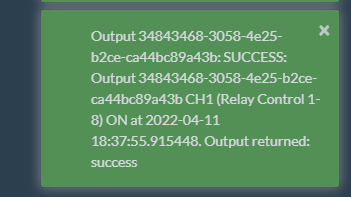 When triggering the controller to turn one of the channels on or off, I get the success note pop up on the right, but the relay never actually triggers.

Odd that the command was sent, but not physically reproduced on the hardware.

Thanks - Sorry for the double post, I’d not seen that other one!

I’ve manually installed this version to roll back a little, however the issue is still present for me. One other has said “just update to last version” which they claimed fixed it… however didn’t say what the version was they were rolling back to was…

Have rolled it back to 8.13.0 and the issue is now fixed. Edit: Have not tested other versions…