Hi!
We are trying to create a timelapse, but when visiting the folder under /mycodo/cameras/ (after having generated the video from the UI) we don’t find anything. The folder is empty.
Do you have any insight about this issue?

If we launch TOP from the the pi, we see the ffmpeg process starting and ending, but nothing shows up in the folder.

Thanks in advance for the help

if you have nothing in the ~/Mycodo/cameras/ directory, it also means you have no images, and without images, you can’t generate a time-lapse video. The only other reason why there wouldn’t be images in that directory is if you configured it to use a different directory.

interesting.
If I press capture still that image is saved in the same directory?

Hi Kyle.
Thanks for your answers.

I crosschecked and even if I capture a still, it doesn’t show up in ~/Mycodo/cameras/

I have to say there is nothing in that folder-

Maybe a problem with permissions?

Technically there is no problem if you can see an actual image from your camera. Are you listing the directory as root to exclude any issue you may have with whatever user you’re trying to access the directory with?

Hi.
Sorry for the long delay in the reply (I’m having remote access problems as well ;(

I assume I have to change permissions, can you post the command?

thanks in advance for your priceless help!

The user/group for Mycodo files is mycodo/mycodo, so you either need to use that user to list/access the files, add your non-mycodo user to the mycodo group, or access them as root (sudo ls ~/Mycodo/cameras/etc...).

Also, the user mycodo doesn’t have a password set, but you can switch to that user with sudo su mycodo.

Hi.
Sorry for the delayed answer.

I have to say I’m lost

if I list the groups, I don’t see mycodo.

The name of the user is serra. I assumed I would have seen mycodo there.

If I type sudo su mycodo. I enter in it, but I don’t know what to do in order to change the camera permission, can you ELI5 more? I’m sorry my linux knowledge is limited

Thanks in advance for your effort!

group will only show the groups you are a member of. sudo cat /etc/group will show you all groups. You can add yourself to the mycodo group and have access to all the mycodo-owned files, e.g. sudo usermod -a -G mycodo serra. You should not change file permissions, because then the user mycodo will not be able to access or modify them, which can break functionality of the system.

Wonderful.
Everything it seems to work now.
For what is worth, if anybody else is reading this, I would mention the user needs to logout and login again to see the groups updated.

Strange thing happening, the I’m posting here out of curiosity and legacy:

If I access the pi (which is elsewhere, I’m using a service called remote.it to enter the device from another location) using ssh or ftp I’m able to access and copy the files.
If I’m entering using VNC, hence as using the pi’s UI, I’m unable to acccess the folders.
Appartenly those folders are not automatically opened in nautilus. I have to specify which program to be used. 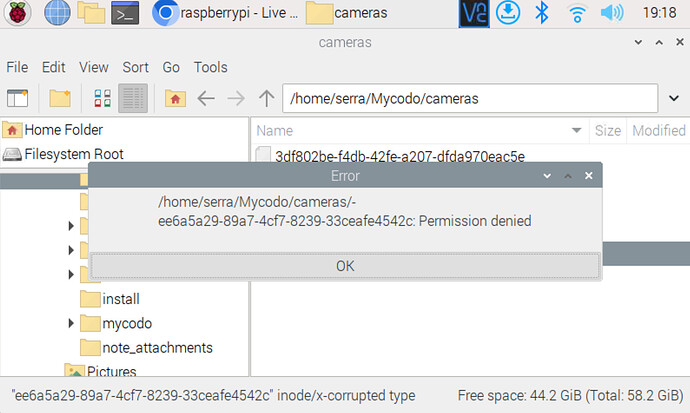